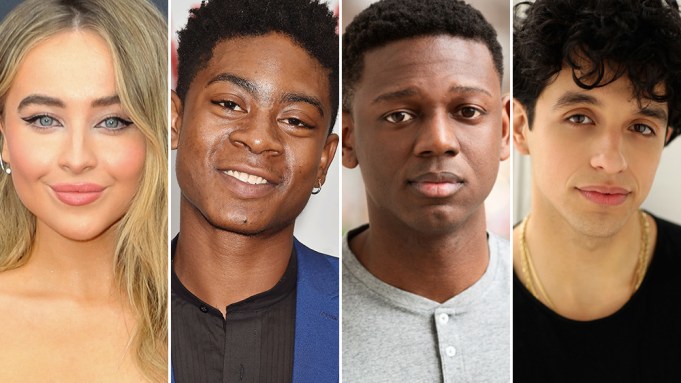 EXCLUSIVE: Sabrina Carpenter, RJ Cyler, Donald Elise Watkins, and Sebastian Chacon have been tapped to star in Emergency, a comedy thriller that hails from Amazon Studios and Temple Hill. Filming is currently underway with Carey Williams directing the film from the screenplay by KD Dávila, which landed on the 2020 Blacklist.

The pic is based on a short film of the same title. The short picked up the Special Jury Prize at the 2018 Sundance Film Festival and the Grand Jury Award at 2018’s SXSW Film Festival.

Cyler will play Sean, a college senior ready to embark on a night of partying with his best friend Kunle (Watkins) and roommate Carlos (Chacon). As they return to their apartment to pre-game, they discover a semi-conscious white girl they don’t know on the floor. Kunle wants to call the cops but Sean vehemently opposes the idea concerned how it will look when the cops show up.

Together, Carlos, Sean and Kunle load the girl into Sean’s van, with the intention of taking her somewhere safe rather than calling the police. Meanwhile, Maddy (Carpenter) has realized that her sister Emma left the party they were at and begins to search for her in a drunk panic using Emma’s phone’s location. What ensues is a chaotic, hilarious, and tension-filled chase all over town as our trio grapples with their differences while attempting to bring Emma to safety.

Maddie Nichols (A Murder to Remember), Madison Thompson (Ozark), Diego Abraham, and Melanie Jeffcoat round out the cast.

Williams and Dávila will serve as executive producers.

“When we made the short film, we didn’t anticipate quite how much it would resonate with people,” said Dávila. “It walked a fine tonal tightrope between comedy and thriller, and touched on the culture of fear in BIPOC communities regarding the police. I’m so glad we have the opportunity to tell a bigger version of the story, and extremely fortunate to have found a team that embraced our vision.”

Said Williams, “It’s an honor to collaborate with Temple Hill, Amazon Studios and the entire creative team of Emergency on such a deeply moving story. I’m thrilled to bring a cinematic exploration of the struggle of young people of color that broadens the type of narrative in this space that audiences have grown accustomed to seeing.”

Sabrina Carpenter Online is your source for everything about Sabrina Carpenters. You may know her for her role as 'Maya Hart' in Girl Meets World or other projects such as Tall Girl, Work It, Clouds, The Hate U Give, The Short History Of The Long Road, Adventures In Babysitting, and upcoming projects Emergency, Tall Girl 2, Alice In Wonderland, The Distance From Me To You and her music career! Here you'll find all the latest news, videos, interviews, high quality photos, and more. please consider donating as it will help our site grow and please visit us again!

The Distance From Me To You (????)
[+]as n/a
[+]Two teens running from very different lives, meet and fall in love on the Appalachian trail. But what starts as a coming-of-age story of first love soon turns into a wilderness-thriller when they find themselves dangerously lost and fighting for survival.